Even Baby Steps Move You Forward 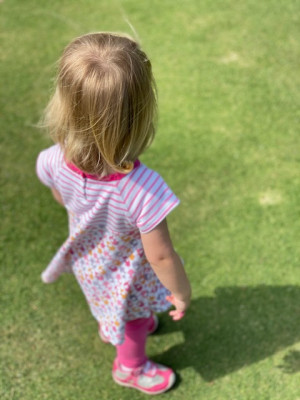 I have been thinking about starting an office blog for quite some time now, but it seems that I never have quite enough time – not just to commit to a series, but to commit to finishing even one piece. I finally decided to take the plunge and get started!

How often I have had an idea that I never followed up on, or how I’ve felt defeated by starting something that I didn’t finish.  Writing for the office is just one example.  My own personal health is another. I have started so many workout routines or diet changes on a Monday morning only to throw in the towel by Tuesday or Wednesday if I give in to the temptation of French fries or hit snooze instead of hitting the gym.  Why do I seem to be programmed that if I can’t do something perfectly that either I am a failure or that I need to wait for a fresh start to try again on a Monday? Or that if I can’t do something 100% that it’s not worth the effort?

Maybe some of you can relate to that, but now you must be thinking, what in the world does this have to do with going to the dentist? Well, I hear it from you moms in the office, too.  Whether it’s the overwhelming thought of being able to floss between all of your child’s teeth, encouraging your child to drink more water (or getting your kids to drink any water at all!), or taking away that pacifier, I frequently hear things like “there’s no way I can do that.”  The idea of perfection or fear of failure can prevent us from getting started with a positive change.  So, what if your 3 year old won’t let you floss between every single tooth every day?  I would say that that’s pretty normal if they have never had their teeth flossed before.  Instead of delaying to attempt what seems to be impossible, think of it this way: even if you are flossing between only a couple of teeth at first, that is more than you were doing before!  It’s not perfection, but it’s a step in the right direction.

Remember, things don’t have to be perfect to be a positive change.  The idea of perfection just isn’t realistic.  So, just jump in and start making little changes.  We all have different goals, but remember, even little things begin to add up to make a big difference.  Working towards healthier habits is a journey, and none of us should expect a miraculous change overnight.  So, try to take one little step.  After all, you’ve got to start somewhere.